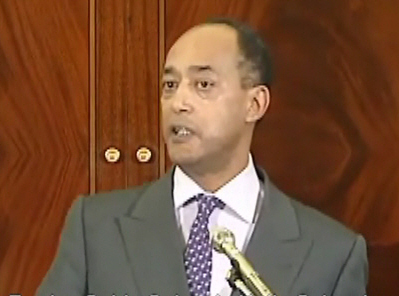 Prince Ermias presents his family’s ancient legacies that are linked to the Solomonic Dynasty and the Throne of David in Ethiopia.

Chicago, IL (PRWEB) June 20, 2014 – The Queen of Sheba Historical Research Foundation is ushering in a new historical narrative which focuses on African peopleâ€™s ancient royal origins that are historically linked to KUSH (ancient Ethiopia spelled â€œCushâ€ in Genesis 2:13) — the worldâ€™s oldest civilization where science and religion, according to the mtDNA Out of Africa Model, met and gave birth to â€œfirst modern manâ€ who were Great Kings and Queens who built more pyramids and great temples in ancient Ethiopia (KUSH) than in KMT (Egypt).

â€œSuch a narrative will inspire a higher cultural identity for our youth than a story founded solely upon slavery in America,â€ says Wolette Selassie, president of the Chicago office of the Queen of Sheba Foundation, â€œWe want to inspire our youth to seek careers in ancient archaeology and advance sciences so that they can help preserve our history for another 2,000 years and beyond.â€

The Queen of Sheba has conducted 40 years of investigative research which historically and biblically links Prince Ermiasâ€™ royal lineage to Cush of Gen. 2:13 and the royal Throne of David in Ethiopia. â€œThe Queen of Sheba can now answer the question of why the African presence is missing in the Bible,â€ said Wolette Selassie who urges parents, teachers, and pastors to come out and bring their children to learn about and reconnect to this forgotten part of our history.

With this motivation in mind, the Queen of Sheba will be hosting His Highness Prince Ermias Sahle Selassie, grandson of King Haile Selassie I, during his first-ever visit to Chicago from June 27 â€“ June 30, 2014. Like his grandfather before him, Prince Ermias seeks to renew mutual bonds of friendship and brotherly love with civic, business, and religious leaders in the black community.

On Sunday, June 29, 2014, at the DuSable Museum, Prince Ermias will deliver an enlightening presentation on his familyâ€™s ancient biblical legacies that include excerpts from his presentation made atÂ The Library of Congress in in Washington, DC in Year 2010, entitled, â€œThe Origins of the Solomonic Dynasty and the Throne of David in Ethiopia.â€ The event is free to the public.

Prince Ermiasâ€™ visit occurs during two historic anniversaries: the 60th anniversary of King Haile Selassie Iâ€™s 1954 visit; and the 78th anniversary of Prince Lij Zaphiroâ€™s 1936 visit to garner support for Ethiopia during the fascist genocide of the Ethiopian people from 1935-1941.

About the Queen of Sheba:Â
The mission of the Queen of Sheba Research Foundation, Inc. is to educate the public about the impact of African Nile Valley civilizations on ancient and modern society as a means to facilitate maximum intellectual and cultural exchange between America and Africa.