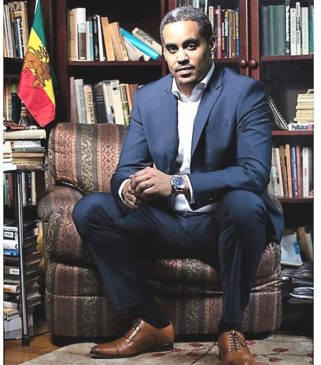 Joel Mekonnen is the great-grandson of Emperor Haile-Selassie I. The newly minted lawyer from Washington DC’s Howard University, Joel has had a busy year, including his marriage which was highlighted, among others, in the New York Times and Vogue magazine. He reflects with The Reporter’s Samuel Getachew on his childhood, his impression of the era of Abiy Ahmed (PhD), on the Derg regime that killed, humiliated and made them refugees in western nations and on his planned return to Ethiopia. Excerpts:

The Reporter: You are many things to too many people. You are a royalty, a lawyer and an activist. You must have had a busy childhood growing up. Share with me the highlights of your fascinating life.

Joel Mekonnen: I was actually born outside the country, in Italy, in 1982, while my family was in exile after the Ethiopian Revolution. My family lived in different places in Europe, and I spent most of my childhood in Switzerland and France. It was not until 1993 that I finally first visited Ethiopia, after the country was liberated from the communist regime and became a Federal Republic under the ruling Ethiopian Peoples’ Revolutionary Democratic Front (EPRDF) coalition.

The next time I would come back to Ethiopia would be in 1999. I moved back to Addis Ababa to live there with my mother, and I went to high school at the International Community School (ICS). I completed the 11th and 12th grade, and spent two and a half year’s total. It was some of the happiest years of my life because I was able to get to know my country, to live there, learn the language and the everyday culture and traditions, make many friends, and overall experience my homeland which I had been away from all my life. I lived in Bole, by Novis Supermarket. I really loved the years I spent living in Addis and it was a very special time for me.

You recently wrote an article lamenting on the recent political activities of Ethiopia under Prime Minister Abiy Ahmed (PhD). What stood out the most for you so far?

In fact, I was not lamenting at all, but admiring the recent political activities that took place and commending Prime Minister Abiy in his new initiatives. Indeed, when I read about all his accomplishments over his first 100 days in office, I was so excited to hear all the good news – as were all the Ethiopians I know. It was so relieving to know that the newly appointed PM had a vision of peace, unity, and love for the Ethiopian people. My emotions were so strong that I felt obligated to speak out about my thoughts. Also, PM Abiy was set to visit Washington DC, where I live, and so I thought the timing for my writing would be perfect. With this article, I could capture the thoughts and feelings of me, my family, and all the Ethiopians I have discussed with, and convey our excitement and hope to the new PM on his visit to the US.

I am very hopeful now with the recent changes and I believe that Ethiopia is at one of the most important crossroads in its history. This comes at a time when the youth are very engaged and active in political life. After all, it is thanks to all the youth protest and demonstration that change was able to happen in our government. Congratulations to all of the youth movements! They are the brave ones who stood up, sacrificed their lives and made a difference for all of us.