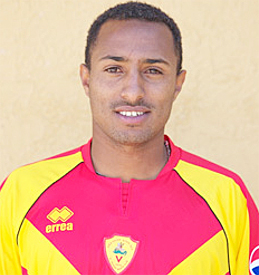 It was a record 26thÂ title for â€˜Sanjawâ€™ or â€˜Kidus Giorgisâ€™ as they are popularly referred to by their passionate fans as they wrestled the title back from last seasonâ€™s champions, Dedebit.

Youngster Fitsum Gebremariam who has been in superb form scored the all-important goal in the second half sending the stadium to raptures.

Saint George began the game like a house on fire as they yearned for another title. The first half ended in a barren draw as Sidama Coffee defenders stood their ground thwarting all attempts from Oumed Oukri, who was playing his last game after penning a three-year deal with Egyptian side, Ittihad Alexadria effective next season.

Fitsum continued with his goal scoring spree when he latched onto a loose ball before firing the visitors into a lead that they held on to the last whistle.

â€˜Kidus Giorgisâ€™ have won 19 of the 21 matches with 58 points, 20 more than second-place Ethiopia Bunna. Dedebit are a distant seventh on 27 points.