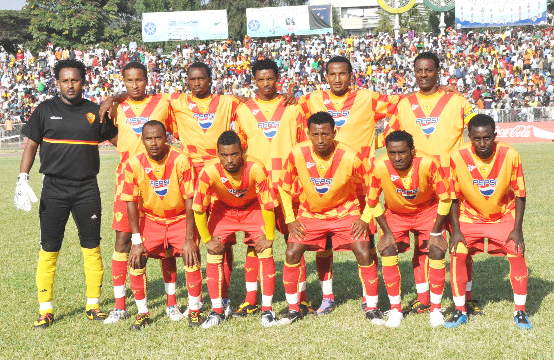 Fitsum Mariam was the hero for Sanjaw with a brace in the 20th and 60th minute while Coffee got their consolation goal through Dawit .

St. George who have been in great form begun the game like a house on fire as they fired from all cylinder in the derby nicknamed Sheger Derby in Addis Ababa.

The new kid on the block; Fitsum Mariam broke the deadlock in the 20th minute with a superb goal that brought the packed stadium to its feet with wild celebrations. St.George went into the break still leading 1-0 .

The second half saw both sides fight tooth and nail and after intensive pressure Coffee’s efforts finally paid off handsomely when Dawit Fekadu pulled a goal back to draw level at 1-1.

However the situation did not last for long when Fitsum got his brace in the 60th minute after a wonderful through ball as he scored his second to secure a vital win .

St. George have opened up a 16 point gap at the top of the table after 19 matches getting 54 points and 17 wins followed by the rivals Ethiopia Coffee who have 38 points.

There was a light moment at the Stadium when security men not privy of the new Ethiopian coach Mariano Barreto denied him entry in the stadium but after consultations he was allowed into the stadium as he seeks to call up players ahead of Afcon 2015 qualifiers.