On Saturday 10th May 2014, the president of the German Ju-Jutsu Federation awarded, Dr. Tsegaye DeginehÂ with the highest golden needle of honor for his outstanding and tremendous engagement to spread Ju-Jutsu and sport across the world particularly in Africa, Ethiopia. 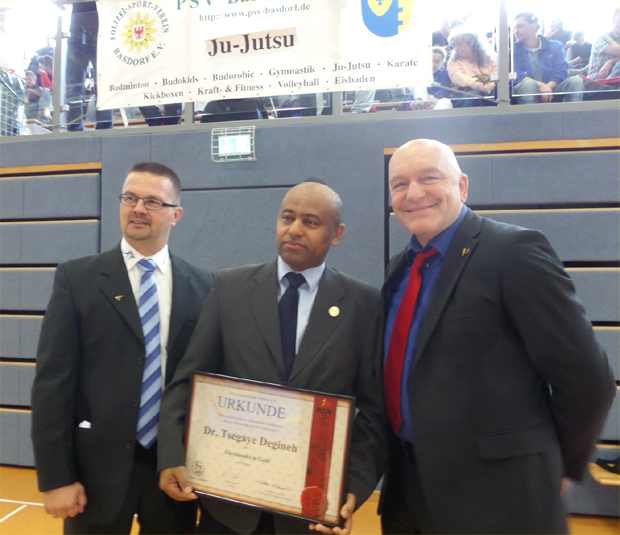 Dr. Tsegaye Degineh is such a good example of Sport Ambassador. As a founder and leader of the Judo and Ju-Jitsu Family in Ethiopia, he received high recognitions across the world. He supported Ethiopia by knowledge transfer, providing his management and leadership experience, sending materials and trainers not last but not least by spending his precious time and his own money. Besides his activities in Ethiopia, he is serving Africa as Vice President of African Ju-Jitsu Union and President of zone 5. As 4th Dan black belt holder in Ju-Jitsu and other martial arts he used to stand on the floor to instruct Ju-Jutsu humbly without choosing place, he wrote the first Ju-Jutsu Book in Amharic and continously preached and instructed the principle of sport, peace, self-defense and the Budo-philosophy and – values.

The golden needle of Honor from the German Ju-Jutsu Federation is most probably the highest honor that is awarded to an Ethiopian by a German National Sport Federation which isÂ  a member of National Olympic Sport Confederation. It is an award to those who go beyond the border on good will, donâ€™tâ€™ give up, mastered challenges, work with honesty and vision.

I hope one day Ethiopia, his mother land, will honor this great person for his huge efforts for Ethiopia, his people and Africa! Germany has done it already and is proud for this award!