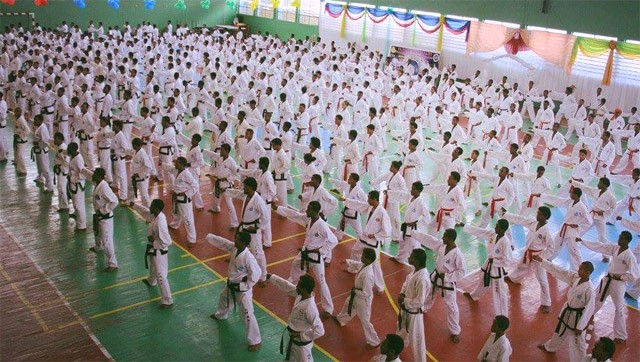 Addis Ababa, Ethiopia ( The Reporter) – Ethiopian Taekwondo Association (ETA) is hosting the first open taekwondo tournament in both sexes in which participants from five countries are taking part including the host.

The tournament will be used as an opportunity to select a taekwondo team which will represent Ethiopia in the 2016 Summer Olympics which will be held in Rio de Janeiro, Brazil.

Over 450 participants from Ethiopia, US, India, Kenya and England are taking part in the tournament which will take place today and tomorrow at the Ethiopian Youth Academy at Arat Kilo Sports Center. Competitors from Nigeria and South Africa failed to take part in the open taekwondo tournament due to visa issues, according to the association.

One team can have as much as 40 competitors from the age of 14 to 32 who also should meet belt and weight requirements.

“We brought some training materials from USA students. We like to come here more often to help, train and compete with each other,” Emanda Forbin, USA open taekwondo member, told The Reporter.

“This tournament has a great value for Ethiopian taekwondo competitors as it will help them develop their experience for international tournaments. We have competitions in the coming year in England and Brazil,” Kiros Gebremeskel, ETA president and taekwondo master, told The Reporter.