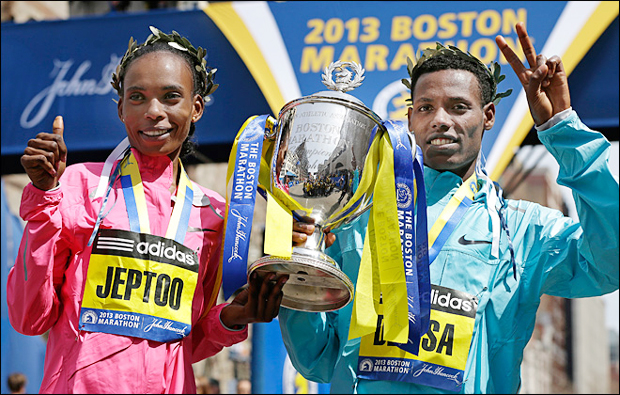 Boston, MA -In the beginning there was Abebe Bikila, the imperial guard who ran barefoot atop Roman cobblestones by torchlight in 1960 and became the first black African to win the Olympic marathon. The Ethiopians owned the distance then, winning three consecutive gold medals at the Games with Bikila and Mamo Wolde. That was before boycotts took them off the global stage, before the prize money arrived and the Kenyans came by the dozens, then the hundreds, to take over the roads.

Now Bikilaâ€™s countrymen and women have been coming off the track and onto the hardtop and restaking their countryâ€™s original claim to primacy over 26 miles. â€œFrom the beginning Ethiopia was a name in marathoning,â€ says coach Haji Adillo. â€œNow, Ethiopia has become at the level of the Kenyans.â€

The Ethiopia-Kenya rivalry is both friendly and fierce. â€œWe are neighbors and we have the same talents for long distance but it is a big rivalry,â€ says Markos Geneti, whoâ€™ll be returning with four of his countrymen to take on eight Kenyans in Mondayâ€™s 118th running of the worldâ€™s most fabled road race while the women, led by two-time New York runner-up Buzunesh Deba and Mare Dibaba, have a quintet to take on Kenyan defending champion Rita Jeptoo and half a dozen of her countrywomen. â€œWe fight for our country and for ourselves.â€