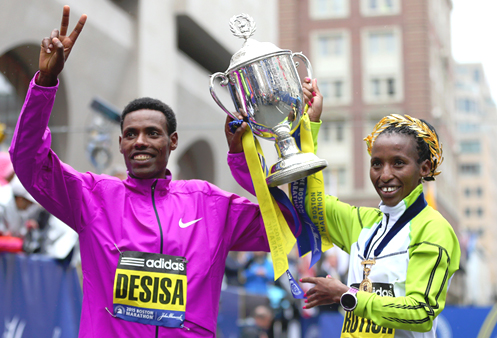 Organizers of the Boston Marathon announced today that Lelisa Desisa of Ethiopia and Caroline Rotich of Kenya will defend their titles at the IAAF Gold Label Road Race on 18 April 18, 2016

Last year the chase for the men’s title was aggressive with a deep international field of Olympic medallists, world champions, and World Marathon Majors winners battling for the win in rainy and windy conditions.

Experience proved the deciding factor, however, as Desisa broke away from Yemane Tsegay and Wilson Chebet in the closing mile to secure his second Boston Marathon title, becoming the only Ethiopian man to have won the race twice.

The 25-year-old took the silver medal at the 2013 IAAF World Championships, having won the Dubai Marathon earlier that year in a personal best of 2:04:45. Desisa has also twice made it on to the podium at the New York City Marathon.

“I am so happy to return to Boston in 2016 to try to make history as a three-time champion of the world’s most historic race and to do my best to represent Ethiopian running on the global stage,” said Desisa. “Boston has become more than a race to me; the city and its people are special and my wins in Boston are the most important moments in my career. I am dreaming of crossing the finish line first for the third time.”