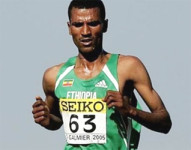 Boston Marathon is a means for Gebre-Egiziabher who won the 2010 New York City Marathon on his debut over the distance, as his ultimate goal is to compete in the 2016 Olympics in Rio de Janeiro, Brazil.

Gebre-Egiziabher who finished third at the 2011 Boston Marathon with a personal best of 2:04:53, has not been in a good condition since 2012 when he encountered an injury at the London Olympic.

He said he is in a relatively good physical condition to win the title, “My condition has improved, even though not fully recovered. I am almost in a good health.”

The athlete who has a great desire to take part in the Rio Olympic said he is running 200 – 210km distance everyday to make himself ready for Boston and Rio.