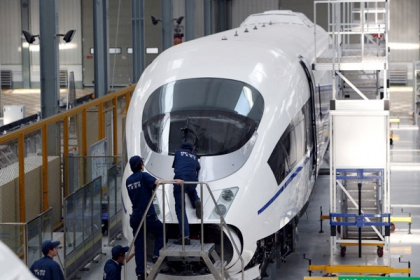 By Wang Chao and Zhong Nan

Addis Ababa, Ethiopia – Â As dusk falls on Addis Ababa, it is easy to spot the shadows of the giant cranes that are busy laying the rails for Ethiopia’s ambitious light-rail transit system.

The $475 million project, being executed by China Railway Engineering Corp, will soon have Chinese-made trams ferrying passengers across the length and breadth of the Ethiopian capital.

The tramcar order won by China CNR Changchun Railway Vehicles, a division of China CNR Corp, in November, however, is much more than just the supply of 41 trams. It marks a major milestone in the shipping of products with real, embedded technology to Africa, sources say.

“It is a milestone for us as it gives us a breakthrough in the dynamic African market,” says Liu Gang, general manager of the international division at CNR Changchun Railway.

According to Liu, the first batch of trams will be delivered in August for test operations of the light train system, which is scheduled to commence by the end of this year. “It is also our first major order from Africa,” he says.

CNR Changchun is one of the two major tram manufacturers in China along with CSR. Both the companies were part of the erstwhile China National Railway Locomotive & Rolling Stock Industry Corp and created as separate entities in 2000.

The company started exporting trams in 1995 and now has clients spread across Australia, Brazil, Southeast Asia and the Middle East.

Liu says international trade was not that significant before 2004. “Until then, our overseas business was less than $500 million.”

Last year the company bagged overseas orders worth $900 million and had exported more than 100 trams with an accumulated value of more than $4.5 billion.

“Africa contributed $100 million in the first year of our business on the continent,” Liu says.

Talking about the tramcar order, Liu says, the first big order came from China Railway Engineering Corporation, the main contractor of the Addis Ababa light train project. The project, designed as a cross, with horizontal and vertical railway lines passing through Addis Ababa, is expected to reduce the serious traffic congestion in the city.