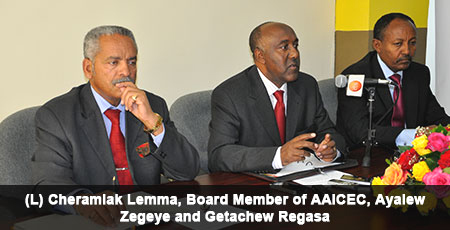 Addis Ababa, Ethiopia – Addis-Africa International Convention and Exhibition Center S.C. (AAICEC) officially launched selling shares for the construction of the first phase of its center in CMC that will incorporate a conference hall, 2 exhibition centers, an amphitheater and facilities for restaurants and business centers.

Though the company formally announced that the shares are available on Friday, March 14, it has been promoting and selling shares since December, 2013. In fact, more than 30,000 shares have been bought by 54 companies and individuals, according to Ayalew ZegeyeÂ , board chairman of AAICEC. AAICEC has 300,000 shares each worth 1,000 birr.

This formal launch is intended to attract big companies with more spending capacity and to show it is a private-public partnership project.

The first phase construction requires half a billion birr to complete. After the company raises the 300 million birr, it will get the remaining amount from a bank as a loan.

â€œWe need to make sure that the banks trust us first,â€ says Ayalew. â€œSo the 200 million birr bank financing is conditional on the share of sales.â€

One of the 20 companies that founded the Center is the Addis Ababa City Administration and it will contribute 33 million birr for the construction in partial payments. Due to the absence of a secondary share market, the company decided the price of shares by itself, according to Ayalew.

When the entire center is completed in the next five years it will boast several conference halls, exhibition pavilions, market centers, entertainment centers and a 4-star hotel. Construction will begin in the next budget year, according to Ayalew.

During the second phase the remaining four pavilions and the finishing work for the first phase will be done. In the last phase a 4-star hotel and a mall containing shops and gymnasiums will be built.

The sale of shares will start formally at the Sheraton hotel on Tuesday, March 18 in the presence of Deriba Kuma, mayor of Addis Ababa. Construction of the whole project is expected to be completed within five to six years.