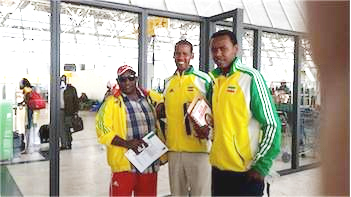 The Ethiopian soccer team (Walia Ibex) is one of the 16 teams qualified forÃ‚Â the third edition of the African Nations Championship. The Ethiopians are set to compete in Group three alongside Ghana, Libya and Congo.

Like the other journalists who applied for accreditation, the Ethiopian sport journalists received their accreditation confirmation letter after they applied via the CAF media channel, which they claimed, was supposed to serve as a visa.

ESJA & AIPS members Ibrahim Sahfi of ‘Addis Guday Magazine’, Yeshak Belay of ‘Hat-Trick Sport Newspaper’ and Fiseha Yednekachew of ‘EBS TV’ were among those journalists seeking entry to South Africa on Thursday January 9, 2014 to deliver news about the progress of Walia Ibex at the ongoing continental tournament.

Albeit armed with the accreditation documents provided by CHAN 2014 LOC & CAF they were surprised when they were denied entry at the Oliver Tambo International Airport in Johannesburg.

The journalists who previously traveled to South Africa for the 2010 World Cup and 2013 ACN tournaments were then detained at the airport before their deportation the following day without their luggage.

One of the deported journalists Yeshak Belay in an interview with local radio station Sheger Fm ‘Tadias Addis’ program said: “The hardship we faced at Oliver Tambo International Airport was unexpected and so unfair. We saw other journalists passing with the same traveling document we provided,Ã¢â‚¬Â they claimed.

Another member of ESJA & AIPS member who was also sent back was photographer Demeke Feyisa who traveled to South Africa on Friday with the national team players. He was singled out and underwent the same treatment as his colleagues and was sent back to Addis Ababa.

ESJA strongly condemned the treatment by the immigration officials of its members and urged the responsible bodies to take immediate action on the issue.

The national association declared its stand with a written letter which was also copied to the Ethiopian Foreign Minister, Federal Sport Commission and Ethiopian Football Federation demanding the: –

– Immediate delivery of all the lost belongings of the deported journalists

– Proper hospitality, respect and working conditions for the journalists who already went through and others about to go.