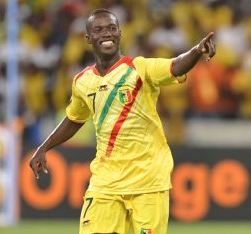 Mali brew up one of the earliest shockers of the CHAN tournament when they beat the Super Eagles of Nigeria 2-1 in the second game of Group A at Cape Town Stadium on Saturday night.

Goals from Abdoulaye Sissoko in the 17th minute and a second half cracker from roving left winger Adama Traore gave Mali a stunning start to the competition.

Mali took the lead in the 17th minute with a ferocious drive from Sissoko after breaking free on the right flank after Mali had cut open the Nigeria defence.

His fierce shot gave Chigozie Agbim no chance from inside the box.

The Malians started very enterprisingly and could have notched a second on quick succession on the 20th and 21st minutes but on both occasions their attempts went agonisingly wide.

Nigeria then tried to fashion their own attacks through a long range effort from Abubakar Ibrahim but the attempt was parried away for a corner by Malian goalkeeper, Soumaila Diakite soon after.

The Malians began the way they started the first half and forced a dangerous corner in the opening minute, again after piercing through the Nigeria defence but from a resultant corner, the Super Eagles cleared a goal-bound shot from the line.

With Mali taking the match to their more illustrious opponents, it came as no surprise when Adama Traore made it 2-0 with another vicious shot which went through the legs of Agbim in the 49th minute.

However, Nigeria urgently hit back with a glancing header from substitute Fuad Salami to set up a frantic finish.

As the match turned into a ding dong affair, both sides wasted some gilt-edged chances with the most glaring being another powerful shot from MaliÃ¢â‚¬â„¢s Cheick Doumbia midway through the second half.

Christantus Ejike then made a tantalising cross into the Malian box but the inviting ball found no takers as the tempo of the game became brutal.

Traore was always proving a handful and had another shot well saved by Agbim in the 78th minute.

Nigeria replied with a sweeping counter-attack in the 88th minute in a last ditch attempt but the final attempt flew over the bar.

In all fairness, it would have been cruel for Mali to lose or draw the match as they looked by far the more polished side and had more verve when going for the attack.