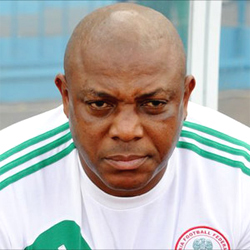 Lagos – Nigeria coach Stephen Keshi picked up the Coach of the Year award at the 2013 Glo-CAF Awards Gala held on Thursday, January 9 in Lagos.

The 51-year old, capped a successful year with Nigeria by being named the best coach in Africa, beating compatriot, Manu Garba (coach of Nigeria U-17 team) and Paul Put (Coach of Burkina Faso) to the honour.

Keshi had a stellar year, guiding the Super Eagles to the Africa Cup of Nations title in South Africa, becoming the second man after Egyptian Mahmoud El-Gohary to win the title, both as a player and coach.

He was presented with his prize by Ivorian FIFA Executive Committee member, Jacques Anouma.

The Ã¢â‚¬ËœBig BossÃ¢â‚¬â„¢ as he is affectionately called takes over the mantle from Frenchman and former Zambia coach, Herve Renard, now with Sochaux.

Under his watch, the Super Eagles also qualified for the 2014 FIFA World Cup in Brazil, the fifth time Nigeria has reached the Mundial.

Also, the Eagles Ã¢â‚¬ËœBÃ¢â‚¬â„¢ reached the finals of the Orange African Nations Championship (CHAN) in South Africa, after unsuccessful attempts in 2009 and 2011.

He becomes the latest Nigerian after Okey Emordi (2004) and Kadiri Ikhana (2003) to be decorated the best tactician on the continent.