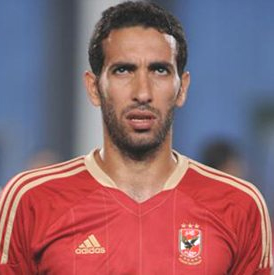 Lagos, Nigeria – Egypt legend Mohamed Aboutrika has been adjudged the Player of the Year (Based in Africa) for an unprecedented fourth time.

The 35-year old grabbed the award at the Glo-CAF Awards Gala held on Thursday, January 9 in Lagos, Nigeria. It was served a befitting farewell to the Al-Ahly talisman who announced his retirement last month (December 2013).

Aboutrika swept the prize at the expense of compatriot Ahmed Fathy and Sunday Mba of Nigeria. It was the fourth time after 2006, 2008 and 2012 that the iconic player has been decorated as such.

He played a vital role as Ahly won the Orange CAF Champions League last year, scoring in both legs of the final against South African side, Orlando Pirates. Aboutrika also found the back of the net six times as Egypt reached the playoffs of the 2014 FIFA World Cup qualifiers.

The accolade further confirms his status as one of the most decorated players of his generation.