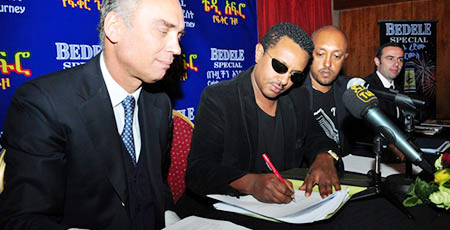 Addis Ababa, Ethiopia -Ã‚Â Ã¢â‚¬Å“It was a decision taken jointly with the artist. Our focus is on supporting events that bring entertainment and joy to our consumers,Ã¢â‚¬Â Heineken stated after it announced it was pulling the plug on the sponsorship deal with Teddy Afro for what was to be a national tour concert.

Heineken Breweries released the statement saying it has canceled the sponsorship deal for Teddy AfroÃ¢â‚¬â„¢s Ã¢â‚¬ËœJourney of LoveÃ¢â‚¬â„¢ on Thursday 2nd of January 2014.

Last month the Brewery Company signed the sponsorship deal with the singer for what was to be a year long tour. Ã¢â‚¬Å“We regret that we will disappoint those who were looking forward to[this event]; however we have decided not to pursue the sponsorship of the concert tour,Ã¢â‚¬Â the statement read.

The tour was set to start on January 11th and it was going to be held in several cities in the country including Dire Dawa, Jimma, Addis Ababa and Adama.

Last month Teddy Afro came under fire when he allegedly made a controversial statement that angered thousands of Ethiopians.

It is claimed that the singer made a statement to a local Amharic language magazine saying Ã¢â‚¬Å“For me, MenelikÃ¢â‚¬â„¢s unification campaign was a Holy WarÃ¢â‚¬Â. Emperor Menelik is a controversial figure in Ethiopian history and his days of rule remains to a sensitive topic for many Ethiopians.

After the alleged statement was made it fueled an outrage among many people which then led to a facebook campaign to boycott HeinekenÃ¢â‚¬â„¢s local brand Bedele Special. The facebook campaign has been calling for the boycott of Bedele as well as the BreweryÃ¢â‚¬â„¢s sponsorship of the tour to be cancelled.

Heineken Breweries did not state specific reasons for canceling the sponsorship deal with Teddy Afro. Ã¢â‚¬Å“It was clear that the time was not right for this concert series.Ã‚Â  We have made the decision based on what is best for our brand,Ã¢â‚¬Â HeinekenÃ¢â‚¬â„¢s spokesperson it concluded.