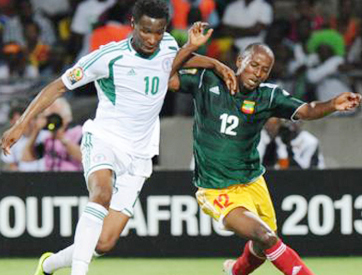 In what should serve as a fascinating appetiser for the 3rd African Nations Championship starting in South Africa next week, Nigeria’s senior home-based squad will tackle their Ethiopian counterparts in Abuja on Saturday. The match starts at 4pm at the National Stadium.

Both teams are in the final tournament of the championship taking place over three weeks in three cities in the rainbow nation, and exclusively for senior professionals playing in the domestic League of their countries.

The Ethiopian squad, known as Walya Antelopes, play in Group C of the competition alongside Ghana, Congo and Libya in Mangaung, while Nigeria’s Eagles confront host South Africa, Mali and Mozambique in Cape Town. Group B features Zimbabwe, Morocco, Burkina Faso andÃ‚Â Uganda, while Democratic Republic of Congo, champions of the inaugural tournament in 2009, head Group D that also includes Mauritania, Gabon and Burundi. General Secretary of Nigeria Football Federation, Musa Amadu, said on New Year’s day that the federation arranged the match in order to give the Eagles an appropriate final build-up session before flying to South Africa.

“We contacted a number of countries also heading to the 3rd Orange African Nations Championship, and we are delighted that the Ethiopians accepted our offer. They will arrive in Nigeria on Friday, play the game on Saturday and depart from Abuja on Sunday,” Amadu explained.

Ethiopia got the short end of the stick against Nigeria’s A team in their African final elimination fixture for the FIFA World Cup Brazil 2014, losing home and away 1-4 on aggregate. The Antelopes delegation, to be led by Yoseph Tesfaye, includes 23 players and six officials. The coach is Sewnet Bishaw, who is also coach of Ethiopia’s A team.