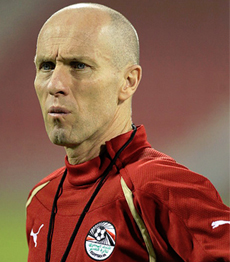 Egypt will not sack coach Bob Bradley after the side’s 6-1 defeat by Ghana in Tuesday’s World Cup play-off in Kumasi.

Reports have suggested the American would be asked to resign followingÃ‚Â the first-leg loss that all-but ends Egypt’s hopes of qualifying for Brazil.

But Egypt would have to pay Bradley about US$366,000 in compensation.

And Egypt Football Association chairman Gamal Allam told BBC Sport: “It is not logical to sack him and pay a big fine for the last match of his contract.”

The Pharaohs went into Tuesday’s game with a 100% record in qualifying but they were handed a crushing defeat by the Black Stars that Bradley admitted has made it “nearly impossible” to overturn in the 19 November second leg in Cairo.

The humiliating result has led to anger among some Egyptian sports fans and the police are taking precautions to prevent them from reaching the airport where the Egyptian players are set to return home.

In the past two days the police and the army have clashed with with fans’ group, Ahly Ultras, who tried to attack the Ahly handball team after they were beaten to the gold medal in the Champions Handball League by a Tunisian side.