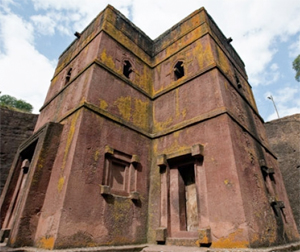 Flying to Lalibela from Bole International Airport in Addis Ababa with my friend, I was going to observe that Addis Ababa is not the only representation of Ethiopia in terms of the lifestyle of the indigenous people in particular.

Touching down at Lalibela airport, I felt like we were left alone at the runway Ã¢â‚¬â€œ no aircraft were in sight waiting to take off. All the artificial dins seemed to be absorbed by a strip of greenery and a beautiful mountain ridge in the region. Near the exit of the airport, young locals were shouting at tourists to draw their attention to the accommodation they provided.

Walking down the hill with bundles of straw in light clothes, was a small kid. I wondered if he traveled all the way up from the mountain with no bathroom stops or even occasional breaks in his lengthy and exhausting trip. Waiting for us with a beam in the midst of the bumpy road were two young children who then uttered, Ã¢â‚¬Å“Welcome to Lalibela!Ã¢â‚¬â„¢Ã¢â‚¬â„¢ in excitement.

Lalibela is one of the popular tourist destinations in Ethiopia with local people and foreign travelers weaving the geography of Lalibela together. It was not hard to imagine that numerous people in Lalibela are making a living through the tourism business as our local guide, Abie, told us that prices here are comparably high because of its position as a tourist attraction. In fact, we had no choice but to call off a visit to a UNESCO World Heritage site, the eleven churches, which were hewn from the living monolithic rock during the reign of King Lalibela (13th century) due to the dearth of money on hand.

Just in one hour, I noticed two things about the people of Lalibela that struck me as a surprise: fluency in English and hard-working nature. After some ten minutes on foot from Lalibela Hotel, we reached a busy district around our accommodation which was full with souvenir stores and cafeteria. Read more