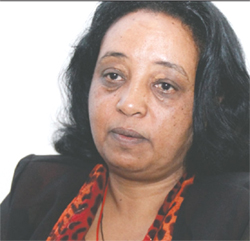 Addis Ababa, Ethiopia – Fasika Kebede, first president of the Enat Bank, a bank that relies on women professionals in the banking sector, has tendered her resignation to the board of directorsÃ‚Â Ã‚Â  in less than a year since her appointment to the post.

Fasika’s appointment to the position was almost as dramatic. The National Bank of Ethiopia (NBE) a supervisory body of the banking sector has to reject two potential presidents nominated by the board, Birtukan Gebreegzi and Brutawit Dawit, before it finally settled with Fasika. Later, the first choice Birtukan joined the bank at a vice president post that she still occupies.

Although the reason for her decision to leave the bank is not yet stated, in the run up to her resignation rumors of disagreement between the board of directors and the president was widespread. According to reports, Fasika was an on an extended leave from her work following the alleged disagreement with the board. However, Fasika, former secretary general to the Ethiopian Red Cross Society, did not want to comment on the reasons behind her resignation.

The board on its part, has canceled at the last minute a press briefing that it scheduled for today to both clarify the matter and introduce its new banking products. Part of the reason for the last minute cancellation, however, is a probable unfinished dialogue between two parties, The Reporter learnt. Ã¢â‚¬Å“Tendering a resignation did not necessarily mean that it has been accepted,Ã¢â‚¬Â the Bank’s communication department said.

Meanwhile, Fasika’s absence has prompted the bank to assign her second in command, Birtukan, to fill the vacant position. Before assuming the leadership at the Red Cross Society, Fasika accumulated 25 years of experience at the Commercial Bank of Ethiopia (CBE), where she reached up to a vice president level.

In addition to the majority of bank’s founding shareholders, 65 percent of the 7200 shareholders of Enat are women. The Bank joined the sector with 260 million birr subscribed and 120 million paid-up capital the last fiscal year.