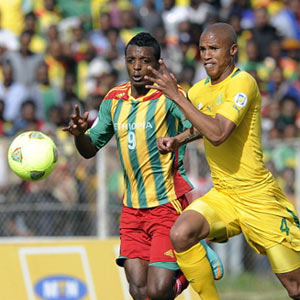 Ethiopia’s prolific striker Getaneh Kebede Gebito is racing against time to recover from a nagging ankle injury ahead of their do or die match against Nigeria’s Super Eagles.

Getaneh who has been in superb form both for club and country suffered an ankle injury while with his Bidvest Wits team in South Africa.

Source intimated to supersport.com that the doctors at Bidvest Wits had been monitoring his progress but the severity of the injury was noticeable on Friday when he was not named in the Wits squad against Golden Arrows in a PSL game played.

Getaneh who has so far scored four goals for his new club Bidvest Wits where he joined a few months ago has of late dogged by injury ahead of crucial matches for his country.

Early in September he suffered a last minute injury while in Brazzaville, Congo and failed to play against Central Africa Republic in the final group match.