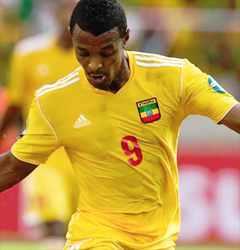 Addis Hintsa who plies his trade at Al Ahly Shendi, Shemeles Bekele of Al Ittihad in Libya and Israel based Asrat Mergasa have reported to camp.

Getaneh Kebede who is still nursing a nagging ankle injury is expected to link up with his team mates from his base in South Africa. However it is uncertain whether he will recover in time for the big clash.

Getaneh’s coach at Bidvest Wits Gavin Hunt gave him time off to recuperate fully from the nagging injury which he suffered on September 6. He is currently working out with the team physio and doing gym work.

On the other hand Salhadin Said who plies his trade for Wadi Degla in the Egyptian league is also expected to join the team on Tuesday.

The government naturally has offered incentive to motivate the team ahead of the do or die encounter with the African champions Nigeria. However some players have shared with supersport.com their displeasure with most saying they feel unappreciated.

“We deserve better as players as we have worked extremely hard but whatever we were given by the government was inadequate and we feel unappreciated yet we have put our country in the World map.”