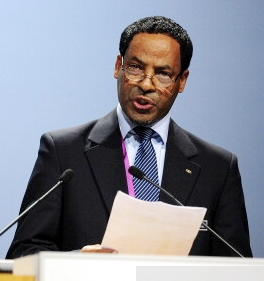 Addis Ababa, Ethiopia – Outgoing Ethiopian Football Federation(EFF) president Sahlu Gebremariam will not defend his post in the October 8 election after he failed to get nominations from his South Region zone.

Gebremariam who has held office for the past four years is credited with seeing Ethiopia Walia Ibex qualify for the 2013 Afcon ,the 2014 CHAN and the 2014 World Cup final play offs against Nigeria to be played on Sunday.

Dr. Abdullah is a former ambassador to Yemen and appears to be the front runner in hotly contested race that will see victor assume office just five days before the crunch much against Nigeria Super Eagles.

The rain started beating the current president when Ethiopia was apparently docked three crucial points for fielding an ineligible player Minyahil Teshome against Botswana that saw hue and cry from the football stakeholders.