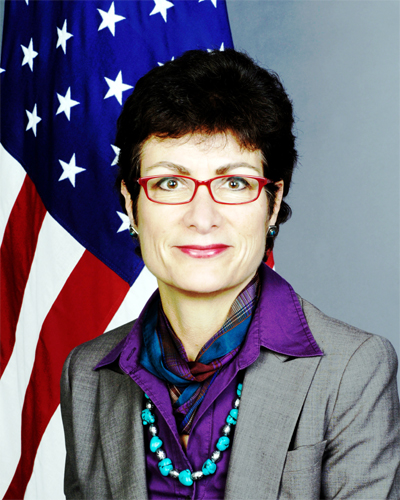 Addis Ababa, Ethiopia – Ambassador Patricia M. Haslach was sworn in as U.S. Ambassador to Ethiopia on 08/14/2013.Ã‚Â  Ambassador Haslach previously served as Principal Deputy Assistant Secretary in the Department of StateÃ¢â‚¬â„¢s newest bureau, the Bureau of Conflict and Stabilization Operations. Prior to this, Ambassador Haslach was the State DepartmentÃ¢â‚¬â„¢s Coordinator for Iraq Transition in the Office of the Deputy Secretary for Management and Resources. In this position, she was responsible for coordinating all Washington-based State Department aspects of the U.S. transition from military to civilian operations culminating with the withdrawal of U.S. combat troops at the end of December 2011.

Ambassador Haslach brings with her a long career dealing with development issues in countries under going transition. She served as the Deputy Coordinator for Diplomacy for the U.S. Global Hunger and Food Security Initiative (Feed the Future) from June 2010 to March 2011 and as Assistant Chief of Mission for Assistance Transition at the U.S. Embassy in Iraq from July 2009 to June 2010 where she was responsible for overseeing the transfer, transformation, and completion of development and assistance programs. As Director for the Office for Afghanistan from 2002-2004, Ambassador Haslach oversaw a multi-billion-dollar reconstruction program. From 2007 to 2009, she was Ambassador to the Asia Pacific Economic Cooperation Forum (APEC), and from 2004 to 2007, she was U.S. Ambassador to the Lao PeopleÃ¢â‚¬â„¢s Democratic Republic. She has also served as Economic Counselor in Pakistan and Deputy Economic Counselor in Indonesia and in Nigeria. Ambassador Haslach began her career with the federal government at the U.S. Department of Agriculture and was assigned to India as the regional Agricultural AttachÃƒÂ© from 1987 to 1990. She followed that assignment with a State Department posting to the U.S. Mission to the European Union managing assistance to the Group of 24 countries.

Ambassador Haslach has received numerous awards during her career, including a Superior Honor Award for Afghanistan reconstruction in 2004, The Director GeneralÃ¢â‚¬â„¢s Award for Impact and Originality in Reporting in 2002, The Herbert Salzman Award for Excellence in International Economic Performance in 2002, and the Sinclaire Language Award for distinguished study of a hard language and its associated culture in 1998.

A native of Lake Oswego, Oregon, Ambassador Haslach earned her BA from Gonzaga University in Spokane, Washington, and her Master in International Affairs and Certificate from the Institute on Western Europe from Columbia University in New York. She has two daughters Shereen and Kiran Herbert.