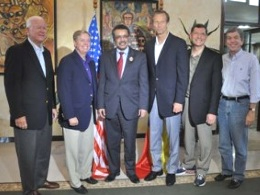 Their discussions largely focused on the impact of US support to Ethiopia especially in the health and agriculture sectors.

Mr Tedros thanked the US government for its generous and bipartisan support for the PEPFAR program which, he said, had tremendous impact for tackling the countryÃ¢â‚¬â„¢s HIV/AIDS epidemic.

Estimates show the HIV infection rate in Ethiopia had fallen from 7% to 1.6% over the past few years; and HIV/AIDS related mortality had dropped by 90% with the advent of the treatment that had been provided through the support of PEPFAR.

Ethiopia was able to use PEPFAR in a unique way to build Addis Ababa a health system up to ensure preventive mechanisms through a primary health care system.

Mr Tedros briefed the senators on the dramatic changes in the reduction of major killer diseases such as TB, Malaria, and HIV/AIDS brought about by training of 38,000 women health extension workers.

According to Ministry of Foreign Affairs,Ã‚Â  despite EthiopiaÃ¢â‚¬â„¢s age-old culture of religious tolerance a few radical elements in recent years had been trying to cause problems, Mr Tedros said; The Government was dealing with the issue mainly through educating the community to dissuade innocent believers from giving support to these elements.