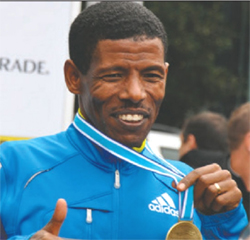 Addis Ababa, Ethiopia -Ã‚Â The world-renowned athlete, Haile Gebreselassie, has once again stretched his legs and is set to enter the business of gold mining.

Haile has finalized the first feasibility study to prospect for gold in the Southern Nations, Nationalities and Peoples’ Regional (SNNPR) State.

A joint venture company, which has been established to engage in gold mining is named Legalula, the moniker for the locality where the company is expected to commence operations. Ã¢â‚¬Å“We have acquired 29,000 square meter plot for preliminary operations and plan to acquire an an additional location”, Haile told The Reporter.

As it is capital intensive and requires extensive experience to operate at full capacity, the company is seeking a partnership with a South African gold mining company, Haile added.

According to Haile, having finalized the first phase of the feasibility study, the company will start exploration work, in spite of all the difficulties the company may face. Ã¢â‚¬Å“I should contribute to the export sector of the country,Ã¢â‚¬Â he said.

Haile disclosed that he is joining the sector because he believes that the country should boost its export revenue by exporting gold. He also indicated that he was inspired to engage in the export sector after his investment in coffee and spice cultivation in the same region a year ago.

Haile has already invested some 70 million birr on 1500 hectares out of which some 200 hectare is used to plant coffee seedlings.

Haile has spent one billion birr ($50 million US) so far on various investments including hotels, real estate and other businesses in his home country.