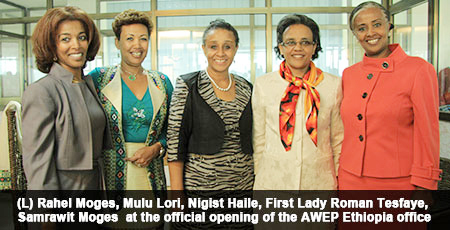 Addis Ababa, Ethiopia –Ã‚Â The Ethiopian Chapter of the African Women Entrepreneurship Program (AWEP), officially launched on March 12, 2013, has now opened its office in Addis Ababa. The Chapter, which has a vision of empowering women entrepreneurs and helping them connect to the international market, currently has over 50 members.

Ã¢â‚¬Å“We are very proud of this accomplishment. It has taken a lot of time and energy to get to this point, but we finally did it,Ã¢â‚¬Â said Nigist Haile, Ambassador and founding member of AWEP.

Although recently launched, the Ethiopian Chapter of AWEP has been in existence since 2006, informally known as the Women Entrepreneurs Group (WEG).

The office is situated in Enat Tower where the HQ of Enat Bank is also located. The office was officially inaugurated by First Lady Roman Tesfaye along with outgoing U.S Ambassador Donald E. Booth, who was appreciated for his extensive support to the Ethiopian Chapter of AWEP.

Ã¢â‚¬Å“The U.S Embassy has really done a lot for us. I would say that, without them, we would not have been able to accomplish this; their support has been really instrumental to get to this point,Ã¢â‚¬Â Nigist Haile stated. AWEP was initiated to empower African women entrepreneurs so they would be able to benefit from the provisions of AGOA. Ã¢â‚¬Å“As you all know African women have not been benefiting from the AGOA provision as they should have. So the whole purpose of creating AWEP is to build the capacities of these women so they can really benefit from AGOA. We all know that when African women benefit, their families benefit, their community benefits, the whole economy and country as well as the continent benefits,Ã¢â‚¬Â Nigist stated.

Other countries such as Zambia, Ghana, Liberia, Cote dÃ¢â‚¬â„¢Ivoire as well as Rwanda have registered their own AWEP chapters.
Ã¢â‚¬Å“I had the chance to meet some members of AWEP Chapters in other African countries and I can honestly say that the Ethiopian Chapter is the only one that has shown massive progress and is standing on its own; it is the only Chapter that has a strategic plan in place and knows where it is going,Ã¢â‚¬Â said Nigist.

Samrawit Moges, President of the AWEP Ethiopian Chapter stated that the opening of an office is just the beginning. Ã¢â‚¬Å“This office may be small, but I guarantee you that through it we will be able to reach great heights,Ã¢â‚¬Â she said.

The fact that this year the African Growth and Opportunity Act (AGOA) Forum is being hosted by Ethiopia was appreciated by speakers present at the launching ceremony. The AGOA forum will have four different parallel forums, the Ministerial, Private Sector, AWEP and Civil Society forums. Samrawit Moges told Capital that after the AssociationÃ¢â‚¬â„¢s participation in the AGOA forum, it plans to implement its strategic plan. Ã¢â‚¬Å“We have a strategic plan that we have been working on and it will be implemented soon. I cannot describe now what they are, but we intend to implement at least three core plans,Ã¢â‚¬Â she stated.

The AWEP Ethiopia Chapter is connected with the different AWEP chapters in other countries and the relevant AWEP coordinators at the US State Department. Ambassador Donald E. Booth, who spoke at the launching ceremony of the Chapter back in March, said that he hopes that members of AWEP will be actively involved in empowering women, especially young girls attending universities, as they are in need of role models.

The Ethiopian chapter will be providing different support services to its members, such as training and knowledge enhancement, provision of a platform for networking, facilitation of export market linkages as well as providing outreach and leadership development programs.