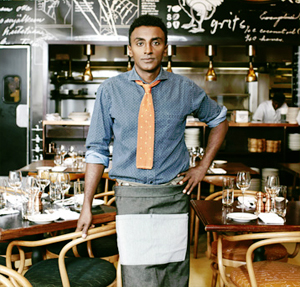 If a youngerÃ‚Â Marcus SamuelssonÃ‚Â had his way, he’d never had stepped in the kitchen. “Not becoming a professional soccer player was the best mistake I ever made,” he says standing in his hailed, belovedÃ‚Â Red RoosterÃ‚Â restaurant on Harlem’s West Side. As slim and sure-footed as the man is, we weren’t exactly prepared for that one. He explains further: “See, when I get out on the soccer field, I can be as fierce as a competitor as when I’m in the kitchen.” Now, we’re getting it.

Since the Ethiopian-born, Swedish-raised Samuelsson landed in the kitchen of the Upper East Side’s Aquavit in the mid-90s, he’s been enjoying a breakneck, practically vertical ascendency as a chef, food-advocate, philanthropist, and (it’s okay to say) celebrity. A James Beard award led to books on both SwedishÃ‚Â andÃ‚Â African foods; multiple, multiple television appearances; the amazingÃ‚Â Food RepublicÃ‚Â website; and a gig cooking up Barack Obama’s first state dinner (he kept it mostly vegetarian for the Indian prime minister). His journey from Ethiopia (where he was born Kassahun “Joar” Tsegie) to an adoptive home in Sweden to New York’s competitive restaurant scene is not only a key to his personality, unique take on food, and story, but it’s also a large part of his appeal and has, no doubt, contributed to his broad popularity (and sales of his bookÃ‚Â Yes, Chef: A Memoir). Read more