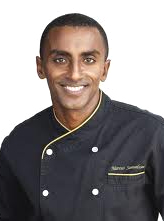 A longer version of this interview was originally broadcast onÃ‚Â June 28, 2012.

Samuelsson’s journey to some of the most celebrated restaurants in the U.S. was a long one Ã¢â‚¬â€ and started several thousand miles away. He was born in rural Ethiopia, where he contracted tuberculosis when he was 3 years old. His mother, who was also battling the disease, walked with Samuelsson and his sister 75 miles to a hospital in Addis Ababa. Though Samuelsson and his sister recovered, their mother did not. After her death, both Samuelsson children were adopted by a family in Sweden. Read more at WHQR