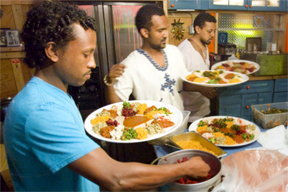 New York – The city’s dining scene is now flooded with pop-ups, and the pool continues to beget brick-and-mortar spots as concepts amass followings. About to make that success-fueled leap isÃ‚Â Bunna CafeÃ‚Â (1084 Flushing Avenue), a vegan Ethiopian dining experience and one of the most interesting players in the industry (and one of ourÃ‚Â 10 best pop-up restaurants in NYC).

Sam Saverance and his partner Liyuw Ayalew initially bonded over their experiences in Ethiopia –– Ayalew is a native; Saverance spent time in the country — and two years ago, they began tossing ideas around to channel the culture of a place they loved here in New York. “The idea was to start something that would reflect the culture in a positive, creative, and genuine fashion,” Saverance explains.

They settled on vegan Ethiopian food, Saverance says, because they wanted to pay homage to the rich vegan religious heritage, which revolves around sacrificing, fasting, and forgoing meat during holidays. “We’re not vegan, but we thought there was something beautiful and healthy and wholesome about the tradition, and we wanted to celebrate it.” Read more