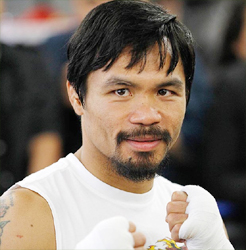 Manny Pacquiao says he can fight for another three years despite two successive losses.

The former multi-division champion said in Singapore on Friday: “It’s part of boxing. Sometimes you lose, sometimes you win.Ã¢â‚¬Â

Brushing aside calls for him to retire and focus on his political career, the Filipino said his Mexican rival Juan Manuel Marquez just got lucky when they fought in December last year.

Ã¢â‚¬Å“He just got the lucky chance; the lucky shot in that fight,” said Pacquiao, who crumpled to the canvas after a crushing right from Marquez in the sixth round.

Speaking to journalists at a promotional event ahead of his November 24 bout in Macao against American Brandon Rios, the 34-year-old Ã¢â‚¬Å“PacmanÃ¢â‚¬Â said: “As long as I can still fight, I am going to fight.

“In my mind, I can still fight two to three years from now,” said Pacquiao, the only fighter in history to win Ã¢â‚¬Å“worldÃ¢â‚¬Â titles in eight weight divisions.

Controversy erupted in the Philippines last week after Pacquiao, a Filipino congressman, said he had considered running for president. A spokesman later said he had no immediate plans to further his political career and Ã¢â‚¬Å“he knows very well” he cannot contest an election until he is 40 years old.

Pacquiao’s seven-year, 15-bout winning streak came to an end in June 2012 with a controversial split-decision loss to Timothy Bradley. It was followed six months later by the sensational defeat to Marquez in their fourth meeting.

The former champion promised a good show against Rios, who is seven years his junior. “He’s a tough opponent,” Pacquiao said. “We can create a lot of action in the ring.”

“We’ve both got something to prove. So we’re both going to be hungry and show that we’re not done yet.”

Promoter Bob Arum, who joined the two fighters in Singapore, called Asia the “emerging frontier” for the sport, saying boxing needed to create a major presence in the region.

REUTERS reports that Pacquiao said three years ago his mother had given her blessing for him to fight once more.

But now he has no plans to call it quits any time soon. “I’m not really sure, as long as I can still fight, I can fight. Maybe I can still fight two to three years from now,” said Pacquiao, who has a professional record of 54-5-2, including 38 knockouts.

Pacquiao said he had trained every day since the Marquez defeat and his body was Ã¢â‚¬Å“addicted to exerciseÃ¢â‚¬Â.

Arum, who also represents Rios, acknowledged politics and not boxing was Pacquiao’s main focus. “The end game is to run and win for the highest possible office in the Philippines. Boxing is just a way-station for Manny,” Arum said. “I think he has much to offer his country.

“He will know when to call it quits and it may well be before a normal fighter would call it quits because he has what I think are more important things to accomplish.”

Pacquiao acknowledged the time of the fight against Rios, 11.30am local time, to cater for the American television audience, would be slightly problematic. He will have to get up at 4am.