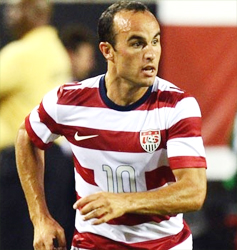 Landon DonovanÃ‚Â fell to his knees and tilted his head back, rain falling on his face. He screamed in ecstasy having scored in theÃ‚Â USAÃ¢â‚¬â„¢s quarter-final rout of El Salvador, and the message was clear: here is a man enjoying his football, enjoying his life.

Ã¢â‚¬Å“I donÃ¢â‚¬â„¢t think IÃ¢â‚¬â„¢ve ever had such a good time playing,Ã¢â‚¬Â theÃ‚Â USAÃ¢â‚¬â„¢s iconic creator and soccer pioneer admitted after the final whistle. He scored five goals for the Americans, displaying a constant influence that saw him named the 2013 CONCACAF Gold CupÃ¢â‚¬â„¢s best player.

DonovanÃ¢â‚¬â„¢s journey hasnÃ¢â‚¬â„¢t always been so joyful. The pressure has been heavy on the Californian since a young age. He emerged with a resounding bang at the 1999 FIFA U-17 World Cup, where he was voted best player of the tournament. It was a first for an American and he immediately stepped into uncharted territory. There was no blueprint for this in American soccer. He was on his own.

A move to Germany followed where he spent two seasons unhappily on the bench at Bayer Leverkusen before being sent back home on loan to MLS. It was a false start for the man tipped to be the savior of American soccer, but the pressure on Donovan was still great.