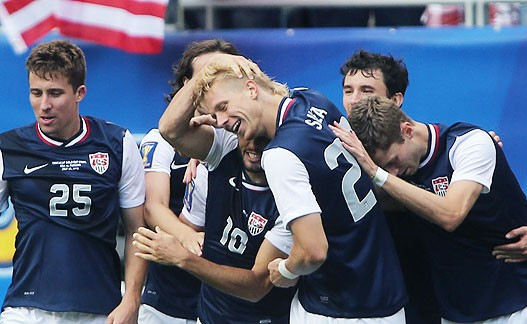 Chicago, IL — It took Brek Shea less than a minute to give the United States a goal.

And the Gold Cup title.

Shea scored 42 seconds after coming into the game as a substitute, and his goal in the 69th minute gave the United States a 1-0 victory over Panama in the CONCACAF Gold Cup final. It is the fifth Gold Cup title for the U.S., but it’s first since 2007. The victory also extended the Americans’ winning streak to a record 11 games, four more than their previous best.

When the final whistle sounded, the Americans on the bench raced onto the field to join their teammates. Several players jumped up and down, and hugs and high-fives were exchanged. Coach Jurgen Klinsmann, who watched the game from a luxury box after being suspended for his tirade over the officiating in the semifinal, quickly made his way down to the field, pumping his fists in the air as he walked.

The Panamians, meanwhile, could only watch in disappointment. They came into the game full of confidence after beating Mexico twice during the tournament, but never really threatened the United States.

The only downer on the day for the Americans was another injury to Stuart Holden‘s right knee. He collapsed to the ground after colliding with another player in the first half and grabbed at his right knee. He was able to walk off the field on his own, but U.S. Soccer later said he had sprained the knee and it would need further evaluation.

Holden missed almost 2 1/2 years because of injuries to his right knee, only returning to the U.S. squad in late May.

The U.S. had been the class of the Gold Cup, outscoring opponents 20-4 in the tournament. Klinsmann used a mostly young team, and its confidence appeared to grow with every victory.

Though Klinsmann and his players had insisted his one-game suspension wouldn’t change anything – ”We’re going to use it a little bit as a rallying cry,” Landon Donovan said Saturday. ”We want to win the trophy for him.” – they lacked their usual sharpness early on. Donovan andÃ‚Â Eddie JohnsonÃ‚Â both struggled to get free, covered closely by Panama’s dogged defense.

But they found their rhythm in the second half, creating several chances. The best came in the 56th minute, DaMarcus Beasley chipped a ball into Donovan, who was in front of the goal at the near post. Donovan got his head on the ball, but not at the angle he wanted and it flew wide of the net. As the crowd groaned, Donovan threw back his head and Beasley swatted the red flag in the corner.

The Americans were still scratching to create something – anything – when Shea replaced Joe Corona in the 68th minute. He didn’t waste any time making his presence felt as the Americans pushed forward again.

Alejandro Bedoya fed Donovan, but he muffed the shot. The ball continued to roll past Panama’s Roberto Chen and on toward the net. Parked inches from the goal line, Shea stuck out his left foot and tapped the ball past goalkeeper Jaime Penedo for his second international goal.

The Americans had a chance to double the lead in the 84th minute when Shea fed a wide-openÃ‚Â Eddie JohnsonÃ‚Â 2 yards from the goal. But Johnson couldn’t finish it, sending the ball flying over the cross bar.