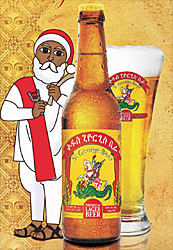 The big boys in world business do not normally miss a trick, and the recent influx of foreign investment in the Ethiopian beer industry is a definite case in point.

Although statistically Ethiopians drink far less beer per head than almost anywhere in the world, a meagre four litres per capita consumption compared with the United Kingdom’s 74, it is the estimated growth forecast that has multinationals dipping into their pockets.

Home to some 85 million people, Ethiopia is modernising at an unprecedented rate. Heavy investment from China has led to numerous highly ambitious infrastructure projects, especially in the capital Addis Ababa. Investment company Access Capital reported total beer sales at 305 million litres for 2008-09, and predicted consumption would increase by up to 15 per cent year-on-year in the near term future, because of “rising incomes, increased urbanization, and still-rapid population growth”.

So with all this potential demand, the industry has to react. And it could be said that it isn’st reacting fast enough. “There is a massive under supply situation, international brewmaster Doug Nicholls, says. “Everybody is pushing the plants very hard and the quality is not getting the attention it should get.

Nicholls is well placed to comment on such matters. A lifetime in the brewing industry has seen him work all over the world, with an impressive CV that includes senior roles at many of the major multinationals. He has recently been spending time jetting between Frankfurt and Addis, acting as a consultant for an emerging Ethiopian brand.

One contributing factor to inconsistent output, according to Nicholls, is a problem with controlling the temperature at which the yeast ferments, which can lead to“a lot of variability’ .He also pointed to the presence of diacetyl, a natural by-product that gives a slight butterscotch flavour. Many British ales may actively encourage this process, but with lager“there should be no diacetyl” , and Nicholls estimates the breweries may be neglecting basic techniques while stretching themselves to meet demand.

Yet there is good cause for optimism, as the big manufacturers recognise these issues and appear to be taking the appropriate steps. BGI Castel, the French brewing giant, currently possess around a 50 per cent share of the market,with its main brand being the hugely popular and widespread St George lager.  As well as already owning the largest brewery, capable of producing around 100 million litres per year, it has recently opened a large site in the Awasa region and is continuing to invest and expand.

BGI have been in Ethiopiafor over 15 years, and by forging relationships with companies like SABMiller is heavily involved throughout Africa. However, it would have good reason to look over its shoulder, for there are two new arrivals here with big reputations.

The first comes in the imposing form of Dutch behemoth Heineken, who in 2011 bought the state-owned Harar and Bedele brands for USD 163.4 million. It recently started construction of a huge complex just outside Addis, which eventually will be able to produce 300 million litres per year, and has committed to enlarge and modernise the two sites that it inherited. 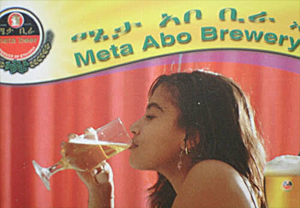 And then there is the London-based Diageo, as its website proclaims “the world’s leading premium drinks business”, who acquired the Meta Abo Brewery for USD 225million. “We will invest behind the long-term growth of the brand, the Meta business, and the wider communities in Ethiopia,”  said Nick Blazquez, president of Diageo Africa, announcing the deal 18 months ago. Diageo will now claim a 15 per cent share of the market, producing the Meta and Meta Premium lagers.

“It will get better”, international brewmaster Doug Nicholls predicts. “Those guys are bringing in new ideas, new technologies, but also just know how to run breweries more effectively and efficiently. However, he also warns that transformation will not be easy, for a start there is the crippling bureaucracy. A recent effort to get power to a site involved a stream of letters, where a face-to-face meeting would have dramatically sped up the process. “It is a major, major problem here. People don’t understand how to move fast.

While Ekwunife Okoli, managing director of Diageo’s African regional markets, feels that it is an exciting place to do business, Nicholls says the reality is different. He points to being “frustrated”at the time it takes to move anything forward, with delays common “on a whole range of fronts”.

Nicholls is sure that these international brands will bring expertise and specialist skills to Ethiopia. The challenge for them will be the implementation of strategy – for wealth and resource can only go so far without the cooperation of local administrators and staff. Current global markets operate at high speeds, and Nicholls hopes Ethiopia adjusts accordingly, warning: Move, or the world will pass them by”.