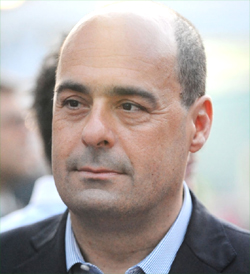 Nicola Zingaretti, the governor of Lazio region, one of the 20 administrative regions of Italy, has called on regional offices and the residents of the town of Affile to cut the funds of the controversial monument dedicated to the fascist general, Marshal Rodolpho Graziani.

According to the governor, the unilateral decision of the Municipality of Affile is Ã¢â‚¬Å“deeply flawed, not only because it is a clear violation of administration with respect to agreements on the use of public funding.Ã¢â‚¬Â

Ã¢â‚¬Å“I asked the regional offices to suspend the loan granted to the City of Affile, originally intended for the completion of the Park Rodimonte and construction of a monument to the soldier, that is, to the Unknown Soldier,Ã¢â‚¬Â Zingaretti wrote in a letter sent to the residents of Affile.

However, improperly, the city municipality then decided to dedicate it to Rodolfo Graziani.

Ã¢â‚¬Å“I do not see why we should celebrate the memory of a war criminal and his actions with a monument paid for with public funds,Ã¢â‚¬Â Zingaretti said.

The regional government has now suspended the 180 thousand euro earmarked for the construction of the park.

The mausoleum, of the Fascist commander, a convicted war criminal, was erected on August 12 last year.

Immediately, a political row erupted in Italy with the main leftist party protesting against the commemoration.

It is to be recalled that the Tedros Adhanom (Ph.D.), Ethiopian Foreign Minister, has called on the international community and the African Union states to condemn the erection of a memorial in Italy dedicated to the memory of Graziani who was responsible for the slaughter of thousands of innocent people in Libya and in Ethiopia.

Speaking at a ceremony commemorating the 19th anniversary of the Rwandan genocide on April 7th, Tedros said he welcomed AU’s initiatives to prevent and resolve conflicts in the continent, to fight impunity and prevent recurrence of massive crimes as reflected in the AUÃ¢â‚¬â„¢s Constitutive Act which gives the AU the right to interfere in member states.

A statement released by the Ministry of Foreign Affairs said Ethiopia and Libya would have appreciated the possibility of such action in the 1930s when Marshal Graziani was active in carrying out massacres in their countries. He did not deserve to be memorialized but rather should continue to be condemned for his war crimes, genocidal activity and crimes against humanity, according to the statement.