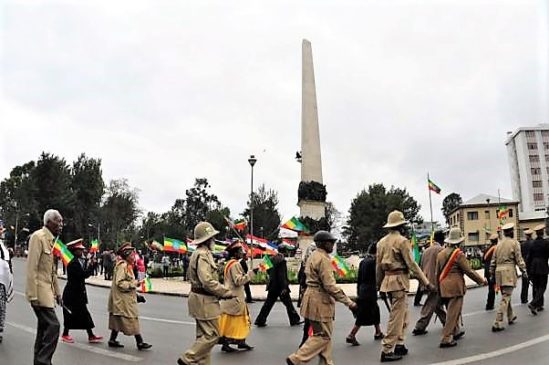 The commemoration included laying of wreaths at the Martyr’s Monument by representatives of Addis Ababa City Administration and other organizations in memory of the dead.

The Day commemorates Ethiopians massacred by the Italian forces following an attempted assassination by Ethiopian patriots Abraha Deboch and Moges Asgedom, against Marshall Rodolfo Graziani, who was the Viceroy of Italian in East Africa, Rodolfo Graziani during their brief occupation.

Up to 30,000 civilians of Addis Ababa were killed indiscriminately within three days. Another 1,469 were summarily executed by the end of the next month, and over 1,000 Ethiopian notables were imprisoned and then exiled from Ethiopia.

The massacre is considered as one of the worst atrocities committed by the Italian occupation forces and has been described as the worst massacre in Ethiopian history.

Representatives of Addis Ababa City Administration and Ethiopian Patriots’ Association laid wreath at the ‘martyrs’ monument’ in honor the martyrs who were massacred by the Italian Fascist forces.