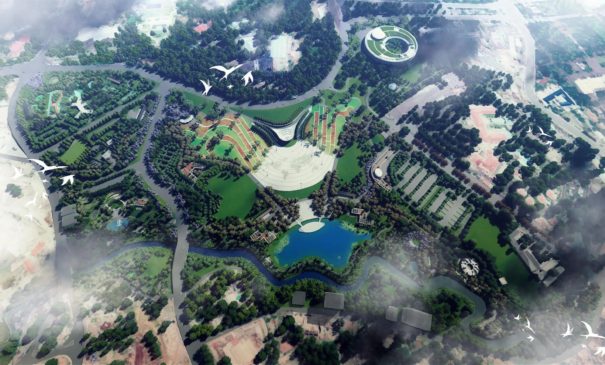 A Chinese firm has begun the construction of a central square that rests on 179,000Sqm of land located adjacent to the premises of the Ministry of Foreign Affairs and on the National Palace Garage for 54.9 million dollars.

Jiangsu Nantong Sanjian Construction Group Co., a subsidiary of the Jiangsu Nantong Sanjian Group Corporation, was awarded the contract for the construction of the central square, which is the second phase of the Addis Abeba Riverside Development Project, aka the Sheger Beautifying Project. Covering 56Km, the Sheger Beautifying Project includes revitalising two rivers that stretch from Entoto Mountain to Aqaqi River. The three-year project was launched two years ago and is estimated to cost close to one billion dollars.

Phase one of the project, which is across from Sheraton Hotel and lies on 27ha and covers 1.2Km along the river, will be handled by First Highway, a subsidiary of the state-owned China Construction Company (CCCC). The second phase of the project lies on 16ha of land and spans 10.5Km of the riverside with a total cost of close to seven billion Birr. Both phases are fully financed by the Chinese government.

First Highway was awarded for phase one of the Project at the Second Belt & Road Forum for International Cooperation. The project is expected to be completed in one year and is nearing completion. First Highway took over the project from Geom Luigi Varnero seven months after the Italian company was awarded the contract. The project incorporates the construction of a “Friendship Square,” the “Central Axis of Etiquette,” a waterfall belt, a central rally plaza, a lakeside fountain, a music square, five amphitheaters and an artificial pond. The waterfall has been built on Banteyiketu River.

Expected to be completed in a 14-month period, the sole construction of the central square of the cluster of three gardens lies on 13,000 Sqm. This segment will have a science museum, a children’s amusement park, a sports centre, a waterfront, auxiliary buildings and landscaping. The project also includes a domed theatre, pavement and ornamental lighting.

The science museum and the dome theatre is going to lie on the land next to the Ministry of Foreign Affairs, whereas the amusement park, wedding front and the sports centre are located at the National Palace Garage, which has already been demolished. The central square is encircled with landmark buildings such as the National Palace, the Grand Palace, Sheraton Hotel and the parliament. The Chinese firm has already started demolishing and digging the central square section.