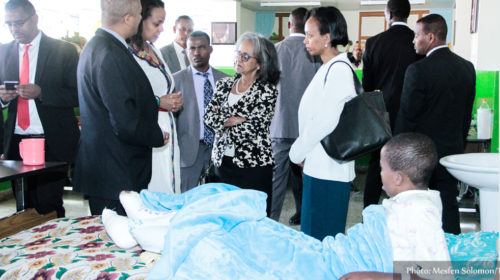 The renowned Cure Children Hospital of Ethiopia marked its 10th year anniversary on Tuesday in the presence of President Sahle-Work Zewde of Ethiopia and Trevor Rees-Jones, a Texan multi-billionaire oil tycoon who is also the founder of Rees Jones Foundation and a major donor to the hospital in Shiro Meda.

The hospital known for its rehabilitative surgical medical center was founded by an American duo and an evangelical orthopedic surgeon in 1986 named Sally and Scott Harrison. They spent some time in Malawi, the latter preforming spine surgeries, became a mentor and a teacher to young aspiring medical doctors. The Ethiopian operation was started following their experience working in Malawi as medical professionals.

“The people we serve are often abused, neglected and facing some kind of disabilities. We like to see an effort born in Ethiopia that makes sure that no child is born in the country and left with a clap foot a few months after birth,” Rick Gardner, the Medical Director of Cure Ethiopia said in his maiden speech.

Sahle-Work praised the center and called for donors and the local community to support it.

“No organization can stand alone by itself and we all need to support Cure Ethiopia,” said the President. “It’s rewarding to see the dedication of Cure to change the lives of children. I am most impressed and its one worthy of our support and its services are to be commended,” she added.

Since its founding, the center has performed about 2,500 surgeries a year, in areas of cleft lip, clubfoot and limb deformations and has so far, preformed about 17,000 surgeries. Within its orthopedic training site, it also provides didactic and clinical training in pediatrics and advanced orthopedic techniques and has a pediatric and orthopedics teaching sites.

Lia Tadesse, State Minister of Health, said praising the center, “The work Cure is doing has a huge contribution and it gives hope to many children.”

The hospital has operations in a variety of nations in addition to the one in Addis Ababa including in Kenya, Malawi, Niger, Philippines, Uganda, the United Arab Emirates and Zambia. It is the biggest provider of a pediatrics surgical care in the developing world. Among its board membership is the former second-first lady of the United States, Marilyn Quayle and the noted American Christian music artist, Chris Tomlin.