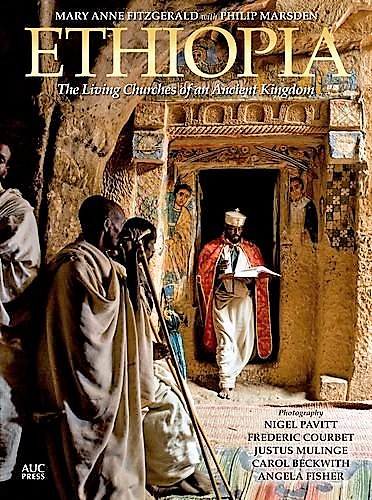 The ancient Axumite Kingdom, now a part of Ethiopia, was possibly the first nation in the world to convert to Christianity. In AD 340 King Ezana commissioned the construction of the imposing basilica of St. Mary of Tsion. It was here, the Ethiopians say, that Menelik, son of King Solomon and the Queen of Sheba, brought the Ark of the Covenant containing the Ten Commandments. By the fifth century, the Ethiopian Orthodox Church had spread beyond Axum into the countryside, aided by nine saints from Byzantium, and over the next ten centuries a series of spectacular churches were either built or excavated out of solid rock in the region, all of them in regular use to this day. Lalibela, a UNESCO World Heritage Site, has the best known cluster, but the northern state of Tigray, less famous and more remote, has many churches that are masterpieces of design.

Ethiopia: The Living Churches of an Ancient Kingdom traces the broad sweep of ecclesiastical history, legend, art, and faith in this sub-Saharan African kingdom and describes some seventy of the most breathtaking churches, with their astounding architecture, colorful decoration, and important religious festivals, all illustrated by more than eight hundred superb color photographs by some of the most celebrated international photographers of traditional cultures. This magnificent, large-format, full-color volume is the most comprehensive celebration yet published of the extraordinary Christian architectural and cultural heritage of Ethiopia.

Ethiopia is the third book on iconic sacred places published by Ludwig Publishing and the American University in Cairo Press, following the bestselling success of The Churches of Egypt and The History and Religious Heritage of Old Cairo.

You can buy the book at Amazon