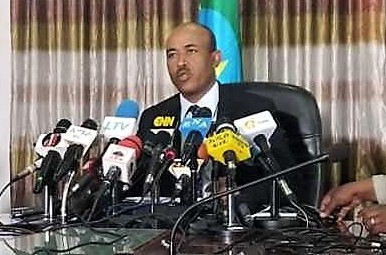 In his press briefing today, the Minister said the the decree will be tabled to the House of People’s Representatives with 15 days.

According to the Minister, the State of Emergency was needed to protect the constitution and constitutional order. He also dismissed as false rumors of military takeover of the government.

Siraj said a Command Post has already been set up following the declaration of the State of Emergency by the Council of Ministers yesterday.

The decree prohibits preparing, printing and circulating via media writings that could cause disturbance and suspicion among people as well as displaying or publicizing signs which could stir up violence.

The decree allows law enforcement bodies to detain without court warrant any individual who orchestrated, led and organized as well as took part and suspected of taking part in criminal acts against the constitution and constitutional order. The individual will face justice after necessary investigation.

In order to seize materials which were utilized or could be used to commit crimes, they could search any houses, areas and vehicles as well as stop, ask and search a person without a court warrant, the Minister noted.

As far as a curfew is concerned, the he said it will be announced in the future, adding a road could be blocked, service delivery institutions could be shut down for some times. People could also obliged to remain at or prevent from entering a specified area.

Measures on the provision of protection for infrastructures of institutions will be announced in the future, including areas where people are prohibited to possess firearms, sharp objects and inflammable materials, he said.

Various administrative structures that were destroyed due to conflicts will be reinstated in collaboration with regional states and local communities.

He said various supports will be provided in collaboration with regional states and local communities, to rehabilitate and return to their previous villages those who were displaced due to ethnic-based and other conflicts.

Necessary protection will be given to service delivery institutions, businesses and public institutions to prevent deterrence in their services, he said, adding anyone who will breach this and stop their services will face justice.

Law enforcement bodies also ensure the safe supply and distribution of basic goods as well as availability of transport services. They will also deter activities that could hamper the teaching-learning processes at schools.

According to him, details of the decree will be announced by the Command Post. The six-month State of Emergency will be extended if it is necessary, he said