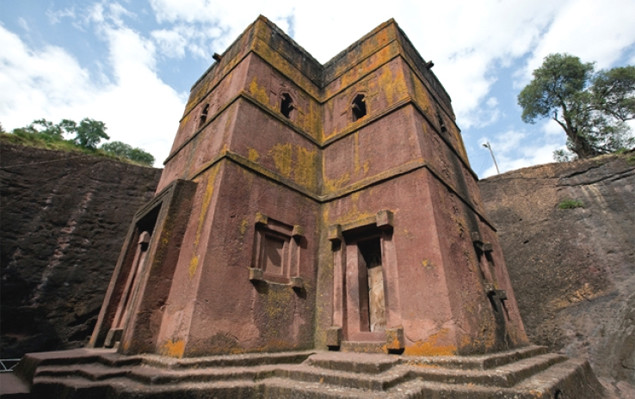 Addis Ababa- A restoration program aimed at replacing the temporary shelter of one of the rock-hewn churches of  Lalibela, Bete Golgotha Mikael, will start this month, Authority for Research and Conservation of Cultural Heritage (ARCCH) disclosed.

In an exclusive interview with ENA, ARCCH Cultural Heritage Conservation Director Hailu Zeleke said study of the project had to pass through critical evaluation from all stakeholders before approval.

The study conducted by international companies was followed by the assessment of Addis Ababa University and experts from the Authority.

According to the Director, the restoration is expected to get finalized by the middle of July this same year.

The rehabilitation project experience of  Biete Golgotha Church is a pilot project to restore the other “Wonders of Lalibela,” Hailu revealed.

The U.S Ambassador’s Fund for Cultural Preservation (AFCP) program and the World Monuments Fund cover the conservation cost of Biete Golgotha, which is expected to cost about 20 million birr, it was learned.

The temporary shelters of  Biete Golgotha and the rest of the Rock-hewn churches were erected in 2008 with an outlay of 10 million Euros by the European Union to protect the heritage sites of Lalibela from damage.

The Director stated that the formation of fractures is one of the main problems causing water to sip into in the monument’s interior rooms.

Recent assessments have also revealed that the shelter is uninviting for visitors and not in tune with the world-class monuments despite its temporary benefit in protecting the heritage from wind, rain and sun.

Hailu urged all stakeholders to exert every support to protect such wonderful heritages sites.

The Director further noted that a conservation work can never be considered a finite operation as it is very important to also constantly monitor situations to assure the efficiency of the solutions applied to the monuments.

The rock-hewn churches of Lalibela are among the marvels inscribed on the World Heritage List of UNESCO in 1978.