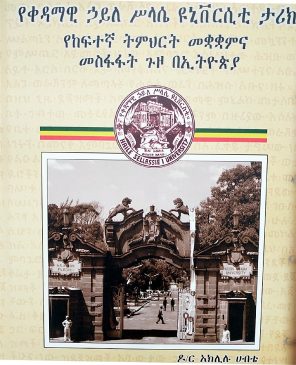 Born in Addis Ababa in 1929, he himself earned a Bachelor’s degree with distinction at University College of Addis Ababa (that would later be expanded into Haile Sellassie I University) in 1954. After earning a Bachelor of Education from the University of Manitoba, Canada, a Master of Education and a Ph.D. from Ohio State University, he returned to Haile Selassie I University. There, from 1958 to 1969, he served successively as Lecturer in Education, Head of the Education Department, Dean of the Faculties of Arts and of Education, and Associate Academic Vice President. Lastly, Dr. Habte was President of the University from 1969 to 1974.  During this presidency, he received an Honorary D.H.I. from Ohio State University. He continued his service to Ethiopia in subsequent years, serving 3 years as Minister of Culture, Sports and Youth Affairs in the Government of Ethiopia.

Dr. Habte moved to the World Bank in 1977, serving first as Director of Education and Training for 10 years and then as Special Advisor on Human Resources Development to the Vice President of the Africa region for 3 years.  He then served as Chief of UNICEF’s Education Division and Special Advisor to UNICEF’s Executive Director for 3 years. His continuing involvement in international, national  and regional organizations concerned with education and with diaspora communities has included consultancies to agencies such as World Bank, UNICEF, Association of African Universities, and Forum for African Women Educationalists.

Buy the book at: Amazon