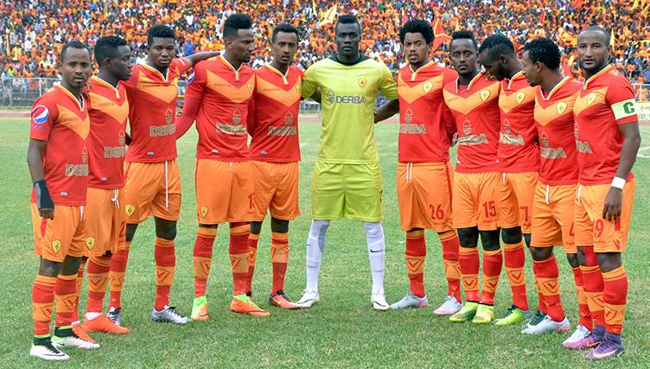 Kidus Giorgis kept on leading the Ethiopian Premier League (EPL) with a narrow win over Hawassa Ketema. Fasil Ketema bounced back to winning ways with a home victory over ArbaMinch Ketema. Woldia surprisingly see off Dire Dawa away behind closed doors.

Kidus Giorgis beat Hawassa Ketema 1-0 in Addis Ababa as they cruise to their fourth successive league title. Hawassa were the better side in ball possession even though they failed to penetrate Giorgis’s strong backline. Gadissa Mebrate rattled the woodwork 4 minutes after the onset before Giorgis took the lead through Salahdin Said’s strike 11 minutes later. Salahdin rounded Hawassa’s Togolese goalie Mensah Souhoho to score his 14th league goal of the campaign. Kidus Giorgis sit at the summit of the log table with a game in hand. After three successive losses Hawassa Ketema slipped to 9th with 31 points.

Fasil Ketema bounced back from their recent losses with a home win over ArbaMinch Ketema in Gonder. The Emperors came to the game having terminated the contracts of head trainer Zemariam Woldegiorgis last week. Abel Yalew, on loan from Dedebit, put Fasil ahead early before he assisted Ephrem Alemu for the second in the 24th minute. Fasil were the dominant force throughout the first interval but the second half saw the visitors getting back to the rhythm. Fasil occupies 6th with 38 points. ArbaMinch are tabled 10th with 31 points.