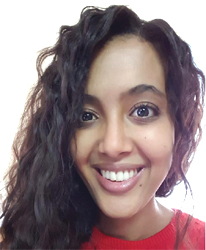 Like the brilliant American Economist, Robert Reich, whom former American President Bill Clinton once observed his short stature on a voyage to Oxford as a Rhodes Scholar, but ended up describing him as the “tallest of his generation” when he nominated him to serve as his Labor Secretary, it is also easy to judge Harvard educated lawyer, Martha Basazinew Kassa. The up and coming international law and policy practitioner is fulfilling a busy citizenry. Her abilities, not disabilities are being noticed by many including by the celebrated Harvard-educated Ethiopian lawyer, Tadesse Kiros. He was one of a slew of mentors who helped engineer her place at Harvard Law School. For him, she is “simply outstanding”. The 28-year-old talked with The Reporter’s Samuel Getachew, on her daring journey to the Ivy League, her childhood, mentors, regrets, and memorable experiences spent at Addis Ababa University Law School and reflects on the ideals of International Women’s Day. Excerpts:

The Reporter: Martha – You have a very interesting background. Can you tell me about yourself?

Martha Basazinew Kassa: Thank you. My full name is Martha Basazienw Kassa and I just celebrated my 28th birthday. My parents divorced when I was nine, so I lived most of my formative years, from 13 to 23, with my father, who I consider to be the catalyst and reason for most of my achievements. My mother was ever present as well. I get all my creativity, stubbornness and flair, fashion and color from her.

No story of mine is complete without disclosing the fact that I have Cerebral Palsy. It’s a pretty terrible condition with different manifestations, but mine is thankfully a milder version. It limits my motor skills especially in regards to my mobility but again, fortunately, my intelligence is intact.

2 thoughts on “Achievement against all odds”