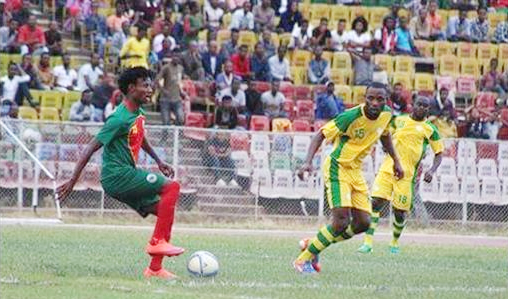 Ethiopian torchbearers, Mekelakeya (Defence) takes a slander lead to the return leg after beating Yong Sports Academy (YOSA) of Cameroon 1-0 in the Preliminary Round first leg clash of Total Confederation Cup 2017 on Sunday in Addis Ababa.

The visitors looked the stronger side but lacked the cutting edge in the final third. Tesfaye headed the hosts into the lead on 41 minutes, and it proved to be the only goal of the match.

The first half was entertaining as both sides deployed a more offensive tactic. Defence’s Samuel Saliso fired over the bar after being set up by Yetesha Gizaw on 12 minutes.

Nicknamed ‘Mekelakeya’, the homers continued to pile pressure on their opponents relying on the swift counter, and their efforts paid off when Tesfaye headed home just before the interval.

The homers struggled in the second half but held on to snatch the narrow win ahead of the return leg on Saturday, 18 February 2017 in Douala.

Since it was a home game for us, we should have scored more goals. We created more opportunities, but we squandered most. I am not disappointed with our game today. We could not play as were supposed to in the second half as the boys went for protection of the lead. In the second leg, we won’t be defending. We will try to attack and get a result next week.

We had so many opportunities in the first half, but squandered them all. I told my players to push for the equalizer in the second half. Sadly, we were not in a position to do that. We played better in the second half, though we were a bit poor in the final third. We have seen our opponents so we will prepare well by rectifying our weakness for the second leg in Cameroon.