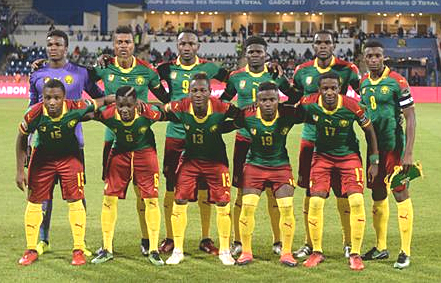 Cameroon will face Egypt in the 2017 Africa Cup of Nations final following a 2-0 win over Ghana in the second semifinal played at the Stade de Franceville, in the Gabonese city of Franceville, on Thursday evening.

Michael Ngadeu-Ngadjui and Christian Bassogog were on target for the Indomitable Lions as their fairytale run continued as Hugo Broos led Cameroon to their first final since 2008.

Cameroon dominated the opening half hour, and following a rather cagey start, a chance from a corner-kick in the eighth minute sparked a relentless spell of pressure, with the Black Stars lucky to hold on.

Adolphe Teikeu lost his marker before directing a powerful header on goal, but lucky for the West Africans – who were playing in their sixth successive semifinal – Harrison Afful was well-positioned to clear off the line.

Robert Ndip Tambe then missed a golden chance in the 12th minute. Benjamin Moukandjo fired a pin-point ball into the area, but his teammate could only succeed in directing his resulting shot straight at Brimah Razak from close range.