Chinese club set to offer USD 400,000 per year for midfielder 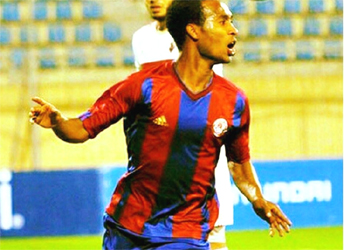 Ethiopian international Shimeles Bekele is to sign for Chinese club Xinjiang Tianshan Leopard FC, which is currently participating in the Chinese league one division. Shimeles, currently playing for Egyptian side Petro Jet as a midfielder, is expected to sign a new one-year contract for an annual payment of USD 400,000. Shimeles revealed this on Fana FM 98.1 Sport Zone program that he was on the way to joining the Chinese club after his current contract expires in three months. This transfer would make him the first ever Ethiopian soccer player to join a Chinese club.

The 27-year-old scored 10 goals from 34 appearances for the Egyptian Premier League side Petro Jet FC. Shimeles joined the Suez-based club at the beginning of the 2014- 2015 season, having previously played for Al-Merrikh of Sudan and Ittihad Tripoli.

Since joining Petro Jet, Shimeles has impressed many, and was regarded by King Fut as one of those who deserved a European move – given his fine abilities and statistics, Shimeles scored six goals, including a hat-trick last season in the Egyptian Premier League. Petro Jet ended the season 11th with 46 points.