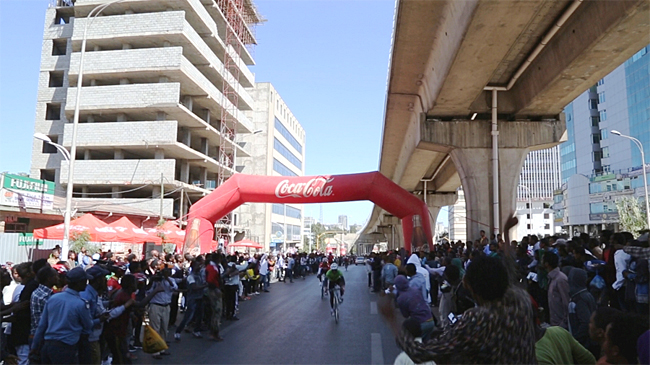 Haile Awel of the Ethiopian Grain Trade Enterprise (EGTE) cyclist emerged first in the men’s 70 km course race on Sunday at the Addis Ababa stadium in the presence of thousands of cheering fans.

The second place was taken by Tesfalem Haile of Electric while Melese Sintayehu from the Youth Academy won the third place. The cyclists had by average 38.5 km speed per hour.

In the men’s 40 km mountain bike race Eshetu Madebo of EGTE came out first leaving behind the Youth Acadmy Shemsedin Redwan and Abrham Negash to take the second and third places, in the order of that. The contenders covered 37.4 km per hour speed.

In the women’s 30 km mountain bike Miraf Gebreigziabher, Firehiwot Teshale and Kidist Oumer occupied from one up to three places, in that order. They had 29.62km speed by average. Three of them belong to the Youth Academy.

In the 20 km race Tewfik Nasir took the first place while Abduljelil finished second. The third place was won by Abiy Abera. The cyclists had 34.51 km per hour speed by average. Three of them belong to Kolfe Sub City.

This was the first cycling event to take place in this Ethiopian season under the name of Coca Cola Addis cycling race. The race brought huge cycling fans around the Addis Ababa stadium.

“We know that cycling tournaments attract huge crowd every time but we didn’t expect such incredibly high turn out. This is a good beginning for us and our new sponsor Coca Cola,” Addis Ababa Cycling Federation (AACF) President Rezene Beyene said.