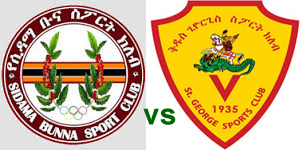 The biggest tie of the week is arguably Sidama Bunna against Kidus Giorgis. Kidus Giorgis tops the log table with 10 points while their adversaries of the day, Sidama Bunna, are second with 9. Kidus Giorgis failed to bounce back after their defeat to Fasil Ketema on Week 4 as they were held to a goalless draw by Adama Ketema on Round 5 in Addis Ababa. Kidus Giorgis holds the upper hand on head-to-head against Sidama Bunna. The Yirgalem outfit has never beaten Kidus Giorgis since they gain promotion to the top tier league.

Kidus Giorgis will be coming out guns blazing in search of a victory away. Sidama Bunna has a 100% record at home but it will be tough to get a point against the reigning champions. Sidama Bunna will be relying heavily on their artistic forward Addis Gidey.