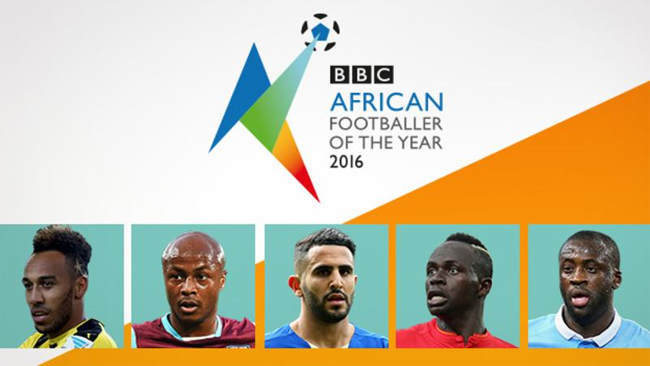 DStv channel BBC Brit will broadcast the announcement of the BBC African Footballer of the Year on Monday evening.

Found on DStv channel 120, BBC Brit will broadcast a 15-minute programme fronted by World News’ Focus on Africa presenter, Peter Okwoche, and feature player profiles, highlights from the award’s launch programme and the live reveal of this year’s winner.

The hugely popular award, which celebrates the best African footballer of the year, has been run by the BBC for over two decades. The trophy will be handed over to the winner at his club.

Borussia Dortmund and Gabon striker Aubameyang is on the shortlist for the fourth consecutive year, while West Ham’s Ghana attacking midfielder Andre Ayew – winner in 2011 – is also shortlisted for the fourth time.

Leicester’s Algeria forward Mahrez is the only player not to have been nominated before, Liverpool and Senegal striker Mane made his debut on the shortlist last year, and Manchester City’s Ivorian midfielder Toure has featured for eight consecutive years and is a two-time winner.

Joel Churcher, vice-president and General Manager for BBC Worldwide Africa, said, “We’re delighted to bring such a key sporting moment to the BBC Brit audience in South Africa. We’re looking to increasingly stretch our channel offering to viewers, and this event TV moment is a start of more exciting things to come.”